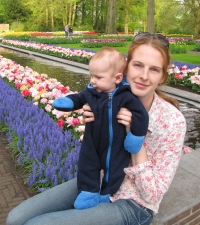 Childbirth in a foreign country – it can seem like a daunting event. No matter what your skill level in the local language there is often a language barrier, as medical terms aren’t commonly learned words. Although I joked with friends that as long as I knew the French word for “push” there would be no problems, the key to having a happy pregnancy in France is good health, some research and preparation, the same as anywhere in the world.

I moved to central France when my husband was transferred here from the United States.  Our first son, six months at the time of our move, had been born in the United States. Upon discovering I was pregnant again my first step was to reach out to other expats through the internet and locally in Clermont-Ferrand to establish contact, find answers to basic questions, and in general, to start the learning process. The internet was very valuable, as it provided not only English-language blogs written by both local women and those worldwide, but I also found the Auvergne (our region) International Women’s Club, a group with over 100 English speaking members. I was quickly able to gather information on resources available, English-speaking obstetricians and general birthing preparation here in France as they might differ from my first experience in the United States.

I discovered that there were two options for birthing here in Clermont-Ferrand, the public Estaing hospital and the private Clinique de Chataigneraie in Beaumont. The public/private split is a common choice throughout France as homebirth is not very common. As our health insurance coverage was the same for both locations, both offered prenatal care, and I could not find large differences between the two, we chose the Clinique de Chataigneraie based on convenience and based on our satisfaction with the initial visit.

Although both locations have obstetricians who speak English, I preferred a female doctor which somewhat narrowed my choices. Although she spoke enough English (and I enough basic French – which now included the word for ‘push!’) for us to understand one another, and this was more than sufficient for all the monthly checkups, there were a couple if instances where it wasn’t enough. The first was the meeting with the anesthesiologist (as he spoke no English) and the second was about complications arising from my first time giving birth (I’ll speak to this in a moment). I remedied this situation by having a native French mother accompany me to one check-up, although it helped to have my husband, who speaks and understands a fair amount,  accompany me to most monthly check-ups.

What to expect from prenatal care

Prenatal care seemed standard and similar to care I received in the United States with a few small differences. The most noticeable is that blood and urine samples are given at a laboratory instead of the doctor’s office. In the Clinique there was a lab on site, but the public hospital, Estaing, required you to bring your own urine samples to your appointments and have the bloodwork done elsewhere. Since I tested negative for Toxoplasmosa my doctor suggested monthly tests (as a first exposure to toxoplasmosis while pregnant can put the baby at particular risk), and the on-site lab was convenient as I could stop there after my check-ups. An interesting fact is that a large percentage of French mothers have been previously exposed, and therefore have positive antibodies and immunity which largely ensure the unborn baby's safety. At the first prenatal visit a doctor can determine whether or not you have had previous exposure and therefore whether or not are at risk.

Another difference in prenatal care is the involvement of the doctor. In the US the ultrasounds were conducted by a technician, the check-up by a nurse, and the doctor only came in for a few minutes to answer questions and complete the exam. My experience in France was completely inverse, as the doctor did all of the above and even gave my husband and me a tour of the delivery floor when we asked.

Prenatal courses such as pain management and infant care are conducted by sage femmes (midwives) who are also very active in the birth itself. You will mostly be attended by a midwife while laboring, however an obstetrician will deliver the baby. This is unlike the UK (per feedback from friends) where a midwife will deliver, barring complications. A pregnant woman has the option of seeing a midwife in addition to her OB-GYN during her pregnancy for additional care, and this might be an attractive option to first time mothers.

Generally speaking, pregnancy and childbirth seemed less clinical here in France than in the United States. This might not be the case everywhere in France, and the comparison might be different if viewed against countries like the UK, where water births and home births are quite commonplace. In early pregnancy, the doctors in both the US and France are supportive of the desire to have a natural birth or to opt for a Cesarean section. As the pregnancy advances, the recommendation to schedule a Cesarean section increased in both, and especially if the child measures on the ‘larger’ side of prognostications based on ultrasound measurements.  The best approach if you have a strong desire for a natural birth in France is to ensure that a native speaker/friend accompanies you to ensure that your desires are understood. Based on the feedback I have gathered, a normally, healthily progressing pregnancy in France is open to a natural birth, a Cesarean birth, or a VBAC.

The important question in all three, if a Cesarean is recommended, is to ask if it is medically necessary. The doctors in Clermont were very supportive of my desire for a natural childbirth, especially after making this clear with a French-speaking friend (and multiple-time mother). They went out of their way to help me birth naturally – even notifying in-person all of the on-call doctors, as my due date approached, of our discussions.

The approach to pain also seemed different; in the US an epidural is administered upon the wishes of the patient while in the UK gas and air is the commonly used method. In France it seemed assumed that an epidural would be given and gas and air is rarely available. It does seem like this very medical approach may be slowly shifting, as more and more hospitals provide birthing pools and homebirths are not completely unheard of, but currently the trend is for a hospital birth with epidural.

The due date is calculated differently

The difference in frequency of check-ups can also be disconcerting. In the United States it is recommended to call your doctor to schedule your first visit as soon as you suspect you’re pregnant in order to start your prenatal care, and typically the first check-up will occur around eight weeks. In France it seemed that the first visit is only scheduled around week 12. Once in the third trimester, the prenatal check-ups took place more often in the US, though here in France you see your doctor once a month, right up until your due date. In America prenatal vitamins are commonly taken by pregnant women before, during and after their pregnancy, while in the UK folic acid will generally be taken while trying to conceive and during the first trimester. This differs from France where prenatal vitamins are prescribed if specially requested, and a breastfeeding vitamin will be prescribed after birth, again, if requested by the mother.

Where to find help and advice

While my favorite resources in Clermont-Ferrand were friends who had given birth locally, knew what to expect and could give advice and translation, I did find several other helpful sources of information. La Leche League in France is a great resource that can connect you to English-speaking assistance with breastfeeding and maternity questions. I also utilized free memberships to a few websites like babycenter.com (or Mumsnet.com) for quick access to health resources and mom-to-be communities.

In my opinion the most important thing was to find a doctor I felt comfortable with, even if there were language barriers. In these modern days of translate.google.com and translation applications you will eventually get your questions answered and the right forms filled out: but you need to trust that your doctor is thinking of the best for you and your baby, while taking into account your own desires and your own personal situation. This will take you a great deal closer to a happy and healthy pregnancy abroad.

By Liene Kukainis,
who writes at FemmeauFoyer2011.blogspot.com


The latest messages on the expat forums - France