Home » Netherlands » Moving » Pros and cons of moving to The Netherlands

Pros and cons of moving to The Netherlands 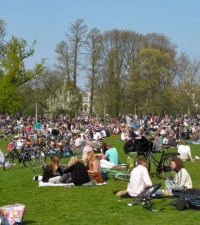 The Netherlands has a big expatriate community. The high standard of living, the bikes, the stable economy and low crime rate make Holland an attractive country for expats. But, in the words of Dutch football legend Johan Cruyff, “To every advantage, there is a disadvantage”. It's not all gold and glitter in the Dutch Lowlands.

Here are some pros and cons of moving to The Netherlands.

Almost everyone speaks English in The Netherlands. This makes starting a new life in Holland a piece of cake. Even official information from government is available in English.

The downside is that the pressure to learn Dutch is virtually nonexistent. It's not uncommon for people to have lived 10 years in Holland to have acquired Dutch language skills that lets them do no more than order a beer in a bar.

The Dutch are so happy and eager to show off their English skills that expats never have the opportunity to try out their new Dutch vocabulary. As soon as the Dutch recognize your accent, they change to English. To understand and blend in with the local culture, to make close Dutch friends, learning the language is a basic condition. But because the Dutch speak English so well, you will not get that chance without persistence and a strong will.

Expats can earn a generous income working in The Netherlands. They enjoy special tax advantages such as the '30 Percent Ruling', causing the Dutch to only tax 70% of your salary.

It's an advantage you are going to need. Prices in the housing sector in The Netherlands are soaring. Especially foreigners, who have no access to the extensive social system, will be shocked to find renting an apartment in Amsterdam or The Hague in the free market starts at 1000 euros a month.

For transport it's best to do as the locals do and mount a bicycle, as road tax and prices car insurance are steep as well. The (obligatory) health insurance sets you back at least €120 a month. Prepare to pay another €40 for your cable and internet package.

And one more thing: If you are used to going out for dinner regularly, then The Netherlands might not the place for you. Restaurant meals are surprisingly pricy.

The Netherlands is located near the sea and has a temperate climate. This makes winters bearable and summer days enjoyable.

Unfortunately, the humid, windy and unpredictable climate of The Netherlands is mostly 'mild' on paper. In reality, the chilled winter season runs from October to April, keeping the Dutch locked in their houses half of the year.

Spending a day at a Dutch beach could end up with you running to your car while you wrap yourself in your beach towel to protect yourself from a violent rain storm. The weather in Holland is full of surprises.

Playing by the (many) rules

Dutch people are direct, straightforward and they play by the rules. Planning, organising, rules and regulations bring order and are thus held in high regard. This means you can trust buses and trains to run on time and corruption is unheard of, but it also means there's a fair amount of red tape.

Also in their personal lives, the Dutch take punctuality and planning very seriously. Dutch people love their agenda's. “An appointment is an appointment”, is a Dutch saying. If you are 5 minutes late for a meeting, however casual that meeting might be, you have to let that person know. Dropping by unannounced at someone's house is certainly out of the question. Spontaneity is not a Dutch trait.

How to make Dutch friends

With the Dutch spending half of the year indoors, tucked away on their couches in their cosy houses and their lives ruled by their agenda's, you will understand it's not easy to enter a Dutch circle of friends. To make friends in Holland, your best luck comes in summertime.

Dutch people are friendliest in the sun. When people hit the streets on flip-flops, when the parks fill up with disposable barbecues and lukewarm white wine is handed out in plastic cups, it's time to mingle.

First encounters with the Dutch will always be pleasant and friendly, but soon enough you will find that to make actual friends in The Netherlands (friends who will call you and invite you over to their houses), patience and endurance is needed. Dutch people are not prone to base a friendship on a casual chat at the park. It takes a while for a Dutch person to let you into his circle of close friends. But once you can call a Dutch person your friend, you have a real friend: a loyal, warm, trustworthy friend, one that will last you a life time.

Tanja van der Lelie is the writer of What's up with Amsterdam where she guides tourists and expats to the hidden gems of Amsterdam. Tanja knows how to get the most out of your stay in the Dutch capital city.


The latest messages on the expat forums - Netherlands

Latest Expat Blogs for the Netherlands