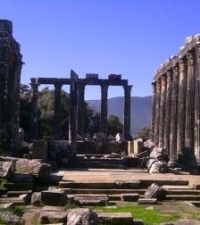 Education in Turkey is a state supervised system designed to ‘produce a skilful professional class for the social and economic institutes of the nation.’ There is a comprehensive network of primary and secondary schools, financed by the state and free of charge for all children between the ages of 6 and 18. There is also a large network of over 160 universities. There is no state provision for nursery-age children but there are many private crèches and nurseries for children between the ages of 2 and 6.

Core subjects of primary education include Turkish, Maths, Hayat Bilgisi (“Life Knowledge”) and a Foreign Language (usually English). After 8 years, around the age of 14, pupils receive a primary education diploma.

Secondary education (often referred to as high school education) aims to give students a minimum level of “common knowledge” and to prepare them for higher education or a vocation.

At the end of secondary education, students are awarded a Lise Diplomasi (Secondary School Diploma) which means they can then take the national exam and apply for higher education. The academic year starts in the middle of September/early October and ends in May or June. Obviously, students are generally taught in Turkish, though a small number of schools will also teach in English, French or German.

As well as universities, Turkey has a large network of faculties, higher educational schools, conservatories and institutes.

The variable quality of education at local state schools has spawned a large number of private schools offering a wider curriculum and, in most cases, smaller class sizes and a considerably higher standard of education. Of course, this all comes at a cost - annual fees of up to £2,000 and a whole range of subsidiary expenses including food travel and school trips. One of the biggest benefits of private education is access to internationally recognised qualifications – a major incentive for parents wanting to increase the chances of their children to travel and grab well-paid jobs.

In most cases, foreign families will elect for an international school, partly to get over the language barrier, partly because the standard of education is higher and partly because most of them teach an International Baccalaureate (IB) curriculum that is accepted by overseas universities. Most private international schools are based in Istanbul, Ankara and Izmir but several other towns and cities have highly regarded international schools, among them, Antalya and Marmaris. This may well have a bearing on where expat families decide to relocate to. In some areas, there is a huge demand for places and you are advised to plan ahead and apply well in advance.

If you relocate to Turkey because of a job with a large company or if you are working in Turkey for a foreign government, your employer may well secure a place for your children; some will even pay the school fees. If not, you will need to source a school, contact the registration department and make an individual application for each child. You will also need to budget for all tuition costs – which can be considerable. Some of the most popular international schools will charge around £15,000 a year.

For school listings, go to Expat-Quotes full post on International Schools in Turkey.

By Jack Scott, author of Perking the Pansies, Jack and Liam move to Turkey, a bitter-sweet tragi-comedy recalling the first year of a gay couple in a Muslim land.


The latest messages on the expat forums - Turkey