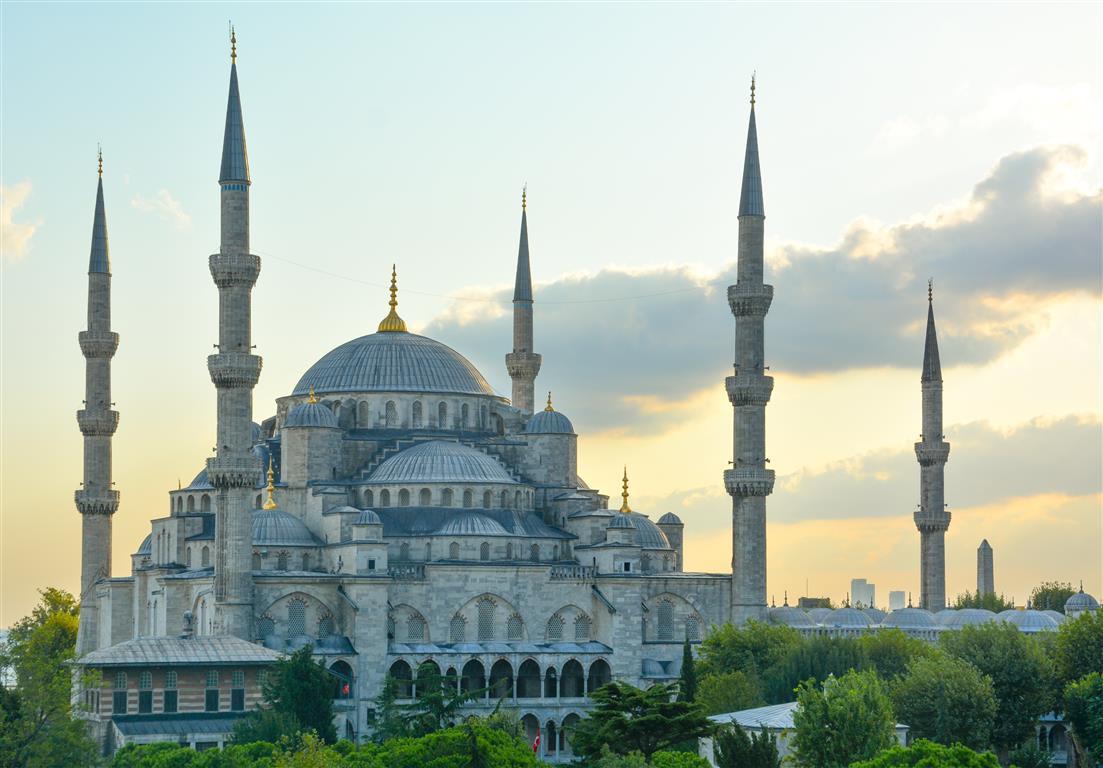 No trip to Turkey is complete without tasting the wonders of Istanbul, entertainment, media, cultural and economic capital of Turkey with a population of 13.5 million (and counting). The political capital, Ankara, seems dull and provincial by comparison (think Canberra versus Sydney or Ottawa versus Montreal). Greek Byzantium, Roman and Ottoman Constantinople and Republican Istanbul, the city that straddles two continents is dirty, busy, loud, infuriating, sophisticated, exciting, chic and sublime.

At its ancient core is the old city, Sultanahmet, where the majestic Hagia Sofia proclaims her seniority to the grand upstarts around her. Her 1600 year old dome seems to float effortlessly above the ancient marble floor like a weather-beaten UFO coming into land. Cathedral, mosque and now museum, Emperor Justinian’s greatest legacy is a part of the seductive silhouette of mosques and minarets that defines the world-famous skyline. Continue your pilgrimage to Old Soph’s baby sister, the curvaceous Blue Mosque, built 1,000 years later. Better outside than in, rest in the well-tended gardens, admire her sexy lines and listen to the call to the Faithful in thunderous surround sound. On the corner of the Blue Mosque is the Hippodrome, formerly the focal point of the Byzantine capital. This ancient arena was used for chariot racing, imperial ceremonies, coronations and parades. Sadly, you will need a lot of imagination to picture a Ben Hur-style scene in your mind’s eye.

Just spitting distance from Hagia Sofia is the Basilica Cistern. Like Hagia Sophia, it was constructed in the reign of Justinian and is the largest of several ancient reservoirs that lie beneath the old city. The enormous vaulted ceiling is held aloft by more than 300 recycled pillars. Two of the bases are carved with visages of Medusa, all bulging eyes and wriggling snake tresses. Don’t worry, you won’t turn to stone if you gaze at their ugly mugs. The cistern was used as a location for the 1963 film, ‘From Russia with Love’ which saw James Bond rowing through the waters. If you’re lucky, you may be serenaded by a string quartet as you saunter round.  A short stroll from the cistern is the Grand Bazaar, a must-see on anyone’s itinerary. This 500 year old structure is one of the largest and oldest covered bazaars in the world with 3,000 shops. These days, you can sip on a latte while taking in the biblical vibe dissonantly blended with the Chinese-made tat.

Set aside at least half a day to take in the splendid Topkapı Palace, epicentre of the imperial Ottoman court for 400 years. The enormous complex is laid out in four piazzas stuffed with a mishmash of stunning pavilions and mini-palaces built over its long history. Highlights include the Disneyesque Gate of Salutation, the pavilion containing the Relics of the Prophet (yes, the Prophet) and, everyone’s favourite, the salacious Harem. If it’s baubles and glitter you’re after, roam around the Imperial Treasury and when you’re all hot and bothered, wander through to the fourth court to take tea and admire the spectacular views across the Bosphorus. From here, you can see Asia. If ancient history and old coffins are your thing, the outer gardens of the palace complex are home to the impressive Archaeological Museum with its rich collection of Hittite, Hellenistic, Roman and Turkish artefacts, including the Kadesh Peace Treaty (1258 BC), signed between Rameses II of Egypt and Hattusili III of the Hittites. It is the oldest known peace treaty in the world.

After all that history, have a little fun in Beyoğlu, the increasingly hip shopping and entertainment district that looks proudly down on the old city from across the Golden Horn, Istanbul’s ancient harbour. Beyoğlu is where Instanbulers come to meet, drink, party and spend (and occasionally to demonstrate). From Sultanahmet, take the walk to the frenetic and noisy Galata Bridge and cross the harbour to the foot of the plateau on which Beyoğlu sits. The incredible panorama will more than compensate for the ugliness of the bridge itself. As you cross it will seem that all of Istanbul is crossing with you. Once on the far side, the fit and the adventurous can hike up the steep incline to the top through narrow streets, taking in the famous conical-topped 14th century Galata Tower on the way. The less mobile can ride the Tünel, the funicular railway (and the third oldest underground railway in the world after London and New York). The short ride takes you right up to Tünel Square where you can hop on the charming antique tram that trundles up and down Beyoğlu’s main thoroughfare, Istiklal Caddesi (Republic Street). This broad boulevard runs like a spine through the area and ends at Taksim Square, the beating heart of modern Istanbul. Apart from the tram, the street is largely pedestrianised making an easy if crowded stroll. Beyoğlu is the place to sup and shop ‘til you drop. Take the plastic. You’ll need it.

If you have time to spare, take afternoon tea and cake in the imposing Pera Palace Hotel, around the corner from Tünel Square. It’s a treat of old-fashioned English gentility. The hotel was once the opulent end of the line for the Orient Express (and where Agatha Christie is reputed to have written part of ‘Murder on the Orient Express’). Until recently, the hotel had fallen on hard times and the welfare line. However, following a multi-million lira facelift, this regal piece of Istanbul’s family silver has received a good buffing, restoring it to its former late Victorian grandeur.

A little further afield are the impressive and largely intact Byzantine city walls, gate and ramparts. Originally built in the 5th Century, the massive fortifications withstood a millennium of invasion and siege until finally succumbing to the overwhelming force of the Ottoman Turks in 1453, led by the 21 year old Mehmet the Conqueror. The event changed the course of world history. It was the final fall of Rome and the start of the Ottoman centuries.

Finally, if you get the chance, take the ferry across the Bosphorus and step into Asia. Not many people can say that they’ve crossed continents on a European city break.

By Jack Scott, author of Perking the Pansies, Jack and Liam move to Turkey, a bitter-sweet tragi-comedy recalling the first year of a gay couple in a Muslim land.


The latest messages on the expat forums - Turkey