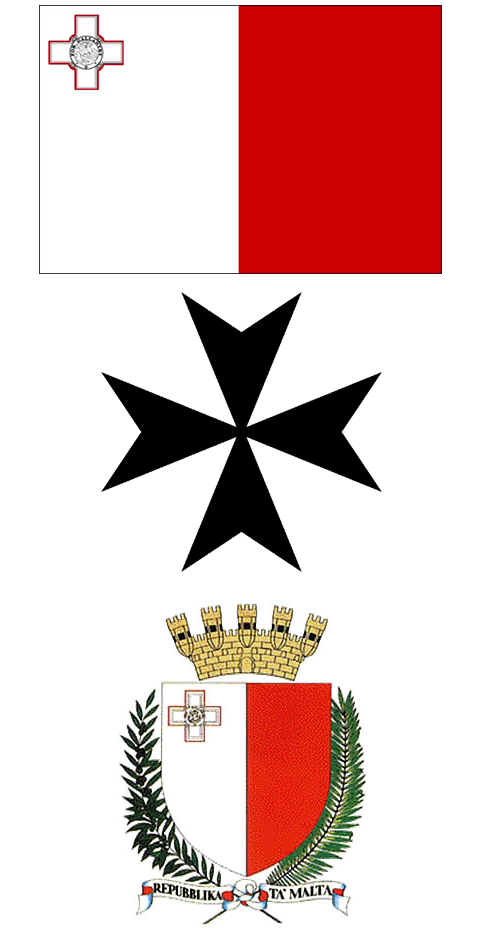 The National Flag of Malta consists of two equal, vertical stripes: white in the hoist (left) and red in the fly (right). A representation of the George Cross, awarded to Malta by King George the Sixth on 15 April 1942, is carried, edged with red, in the canton of the white stripe. The George Cross was awarded to Malta for the fortitude of the population of the island under sustained enemy air raids and a naval blockade, which almost saw the islands starved into submission during WWII.

The Emblem of Malta

The Emblem of Malta bears a heraldic representation of the Maltese flag. Above the shield a mural crown in gold with a sally port and eight turrets represents the famous golden limestone fortifications of Malta and denotes a City State. Around the shield are two wreathes of branches: the dexter olive on the left, and the sinister Palm on the right. These are symbols of peace. The branches are tied at their base with a white ribbon, backed in red, on which is written “Repubblika ta’ Malta” in black capital letters.

The National Anthem of Malta is “L-Innu Malti”. It is written in the form of a prayer to God, composed by Robert Samut and Dun Karm Psalia in 1922. It was officially adopted in 1964.

The first public performance of Malta’s national anthem was in December 1922 and January 1923 during two concerts at Teatru Manoel (Manoel Theatre).

The anthem is played daily in the media, in public schools, and during all official duties of the President of Malta and the Prime Minister of Malta. It is also sung at sporting events.

Guard, Lord, forever, as you´ve done erst and ceasing never,
This land whose name we received, our motherly-named Mother.
Her you have draped with a light whose grace exceeds all other.
On those who govern, sovereign God, bestow understanding,
Grant wellness to those who work, largesse to those employing,
Make firm, make just all our bonds, the peace we are enjoying.

Guard her, O Lord, as ever Thou hast guarded!
This Motherland so dear whose name we bear!
Keep her in mind, whom Thou hast made so fair!
May he who rules, for wisdom be regarded!
In master mercy, strength in man increase!
Confirm us all, in unity and peace!

By Jess Gerrow, who traded city life in Canada for island life in the Mediterranean two years ago. She is a postgraduate marketing student, blogger, and freelance writer.


The latest messages on the expat forums - Malta